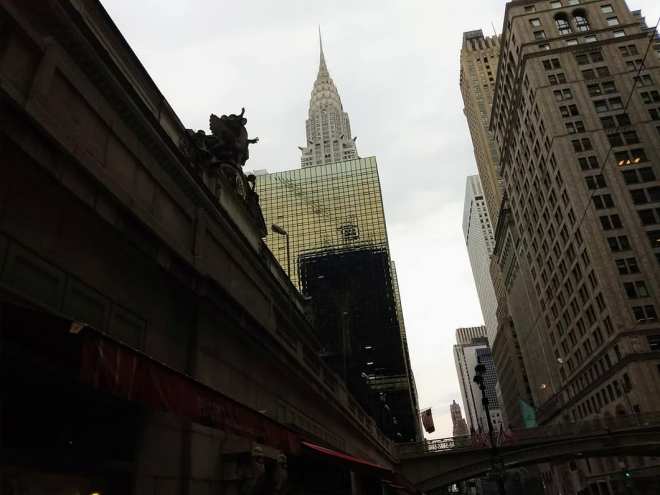 New York, NY. Growing up, it was where everything happened in TV and movies from “Seinfeld” to “Sesame Street,” even though most shows weren’t actually filmed there. And its real life role as host of the UN and Wall Street make it hard to avoid. Not to mention its political importance as the city of Donald Trump before he was president, the place the world trade towers stood and fell nearly two decades ago and “The New York Times.”

So with all that in mind, it really struck me how alien the place is to a resident of the Knoxville, Tennessee area. It should be familiar given how much of it appears in popular culture. And it is still America: You’re never far from McDonald’s, Starbucks and the like, which is good as they’re cheaper than many local places. But the city’s basic mechanics are utterly bizarre to an East Tennessean.

This is not the first time I’ve found New York City confusing. While in Mexico, I’ll confess a fellow student in my program from NYC seemed more culturally different than the Mexicans I met.

My girlfriend Yvonne and I arrived July 14 and had to speed run everything, with Yvonne’s friend and now mine too, Cameron Williams, a local. But I suppose speed running NYC is exactly the right way to do it. NYC seemed to be all about speed, at least when traveling on foot. There were trains to catch and other people to catch up with. Indeed, NYC requires you to move faster and avoid stopping more when on your feet than when in a car.

I expected 42nd street to have parking. So, not having eaten since breakfast, and having roasted at mid-day in a Pennsylvania Dutch County traffic hold up for repairs, we searched. And searched. Until we found in and parked the car at a meter that was modern and digital and looked nothing like and East Tennessee one.

Starving, I headed with Yvonne to the glorious neoclassical structure of Grand Central Terminal and grabbed a spicy shrimp pastry at a Caribbean food stand. The stand only accepted cash, which was a bit strange to me but far from unique in NYC. It’s one of the few things New York has in common with a handful of backwoods hollers in Tennessee — which for the record are about equally strange to me.

Grand Central Terminal is, incidentally, a pretty impressive structure to visit for free. I recommend it.

While Cameron Williams, a friend of Yvonne’s who considers this city his home, if not his actual residence (that’s Long Island) wanted us to take the subway to meet him, we were confused enough at this point that we wanted to stay put and have him meet us.

We then went back to the car, and as Cam pointed out, there was a garage right there. It was just, apparently that all the people, buildings and everything else had made it so that a simple sign saying “Park.” As a side note, it was valet parking. Which to an East Tennesseean comes off about as normal, as any other case of giving your car to a complete stranger.

It was Saturday night and crowds swarmed everywhere we went as we ran around to get dinner and then ride the Staten Island Ferry. Often I found myself scrambling behind after taking pictures with my new phone, searching amid the sea of heads for Cam’s backward baseball hat.

Counter to what you might think, they were friendly crowds. And not formal ones like I’d expected from the city of Wall Street. It was summer, with plenty of short shorts, t-shirts and even a transparent shirt or two, not to mention the guy who did cartwheels in a bikini in Times Square. We stopped to pet dogs multiple times. A rude woman on the New York subway who was rude to others was an exception, not the rule. Indeed, complaining about her constantly telling people to “SHUT UP!” was a bonding experience with the other passengers once she decided to leave.

But I can’t honestly say I fit in here, as much as I enjoyed taking in the sights and sounds. The constant background noise of people talking, cars, subway station buskers and the like made me feel like I had to talk loudly. Which Cam kept telling me I was talking too loud. It was a bit of a mind blow that anyone could still hear me at normal volume. 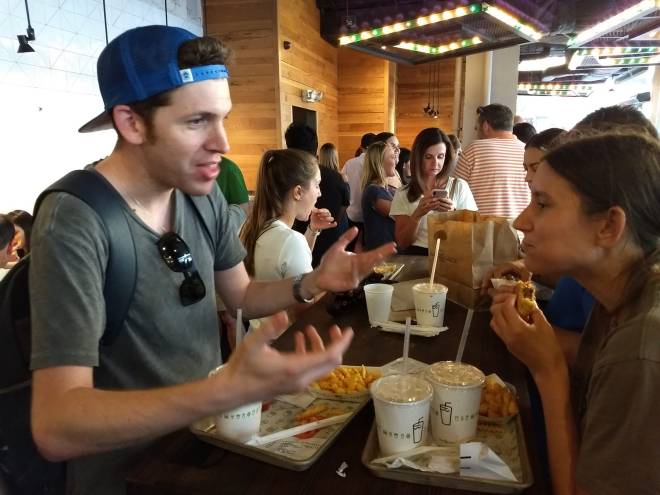 For dinner we had some tasty burgers at the Shake Shack, a licensed operation expanding from New York, but still unknown in the Knoxville area. To give a general idea of if you’d like it, the taste of its signature burger is somewhat similar to Cookout, a franchise that incidentally, hasn’t expanded farther north than Maryland and West Virginia.

Another observation: being an East Tennessean trying to scan my paper subway card and go through the subway turn-style is about as easy as being a two year old playing Super Mario Brothers for the first time.

I love New York, New York. I love the crowds in constant motion, speeding and slowing like rapids but always flowing. Yet the same time it’s like being in “Honey I shrunk the Kids” (that’s the non-superhero version of Ant-Man for you young folks). Familiar in a sense, but bigger and that bigness makes it weird. And on those streets I can finally know what plenty of tourists probably feel in the woods of my own Tennessee, scrambling between roots and rocks to avoid tripping.