People say they’re part of spring, but they were here in Loudon, Tennessee all winter. In fact, I saw them in flocks, their red breasts showing off against the darkening winter sky and the gray of their branches. They sat on branches and flew in clusters. Cornell Ornithology Lab, probably one of the best sources for birds said that’s typical behavior. These tree flocks can sometimes include a quarter million birds. 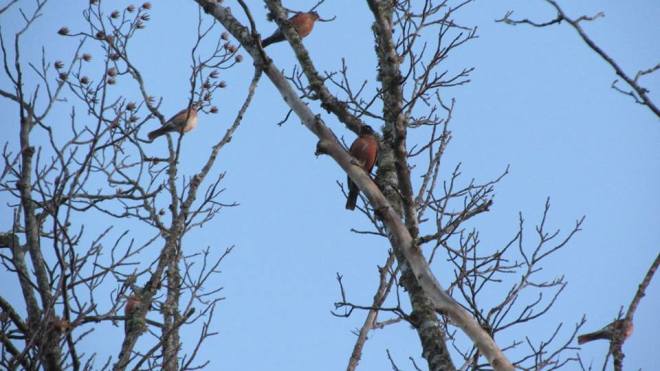 The above photo was from near my home. The number only looks small here because I couldn’t get a crowd shot this pretty. Cornell says it can be up to a quarter million roosting in trees.

See? Not quite as nice a picture.

They spend the fall and winter eating fruit. As a side note, too many honeysuckle berries can be like a drug for them.

Now I’ve begun to see them on the ground again, eating worms and insects. Soon, according to Cornell, they’ll leave their flocks, becoming territorial birds, mating, having children.

My main question has always been “Are these the same ones?”

Cornell’s answer: “Their patterns of movement are poorly understood.” So the winter roosting ones might be the same as the ones we see in the spring or they could be different.

Odd how such a commonplace bird could be a mystery in any way. But here we are.